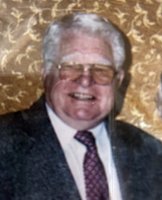 Louis Stephen "Steve" Thacker, 85, passed away on Friday, July 9, 2021. Louis was the husband of Faye Moss Thacker. Louis was born in Frankfort on September 9, 1935 to Alice Lee Thacker and Isaac Marion Thacker. After graduating from Corbin High School, he attended the University of Kentucky and retired from work with the Kentucky Transportation Cabinet after 21 years. He was a member of the American Legion and First Baptist Church. Along with his wife Faye, Louis is also survived by a daughter, Cynthia Knight (Darwin), of Los Lunas, New Mexico; two sons, Louis Stephen "Steve" Thacker II (Donna) of Albuquerque, New Mexico and Edgar A. Thacker of Frankfort; a sister, Sarah Bryan, of Murray; five grandchildren; and four great-grandchildren. He was preceded in death by a sister, Lucy Williams. A graveside service will be held at the Lawrenceburg Cemetery on Thursday, July 22nd at 11:00am.