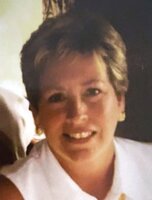 Jerry Ann Gonyer Harville, 78, passed away at her home on Thursday, November 4, 2021 surrounded by her family. Jerry was born in Bakersfield, California on August 27, 1943. Her family moved to Winchester, Kentucky during her childhood, where she later graduated from St. Agatha Academy and went on to attend Eastern Kentucky University. After marrying her husband Jim in 1964, she focused her life on caring for her family and for others. She welcomed countless numbers of people into her home over the years, and she will be remembered for her endless hospitality and the many meals she prepared for family, friends, and strangers alike. Jerry adored her grandchildren and treasured every moment spent with her family and friends. She found joy and peace in soaking up the sun on the beach. A woman of Godly faith, she was a longtime member of Bridgeport Christian Church. Jerry is survived by four children and eight grandchildren: Jon Harville (Michelle) and grandchildren Jonathan (Sarah Belle) and Shelby; Jayme Rader (Tim) and granddaughters Cassidy and Olivia; Matt Harville (Lindsey) and grandchildren Lillian, Madelin, and Jack; and Joa McDaniel (Justin) and granddaughter Eleanor. She also leaves behind a sister, Donna Woosley; a brother, Jim Gonyer; and a host of friends who she cherished. She was preceded in death by her husband, James M. "Jim" Harville, and her parents, James and Irene Gonyer. A memorial service will be held at Rogers Funeral Home at 1:00 pm on Wednesday, November 10th with visitation preceding at 11:00 am. Memorial contributions are suggested to Bluegrass Care Navigators (Hospice) or LIFE House for Animals.