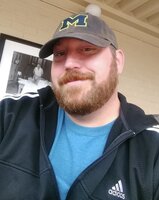 There is a saying that the "dash" between your birth date and death date is about the life you live in between and the memories you fill it with. Brandon Paul Sherk was born on April 29, 1980, to mom, Dawn Redick (Pamula), and dad, David Sherk, in Trenton, Michigan. Brandon passed away peacefully in his home on December 2, 2021, in Frankfort, Kentucky. Brandon walked alongside his family and friends, filling that dash with memories for forty-one years. Brandon is survived by his mother, sisters, Ann Sherk and Cindil Redick-Ponte (Spencer), and brothers David Sherk, Jr. (Angie), and Rick Sherk (Cathy). Brandon's generous spirit will live on through his nieces and nephews. He was preceded in death by his father. He is also survived by many dear friends. One of Brandon’s greatest joys was that he was reunited with his dad’s family in recent years. He even relocated from Michigan to Kentucky to be closer to his brother Rick and his family. He loved Kentucky and built a good life full of all the things he loved, including camping, hunting, fishing, and making bountiful new friendships. Brandon could be tough to read if you didn't know him well. But his stoic exterior protected one of the biggest hearts this world has ever seen. He was thoughtful in creating gifts, and his creations often revealed that he was paying way more attention to the details of his loved ones' lives than they may have realized. Ways in which his friends and family got to witness his kindness included: ● Incredibly thoughtful and creative hand-made gifts; ● Home cooked meals; ● Frequent calls or texts; ● and fun like you've never had. Alongside a close friend, Brandon enlisted in the U.S. Army at the age of 19. During his Basic Training at Fort Knox, he fell in love with the natural beauty of Kentucky. He served in South Korea as a light wheel vehicle mechanic and gained the certifications needed to turn his hobby fixing cars into a career. Brandon was honorably discharged from Fort Riley in 2004. It seems serendipitous that he would end up in Kentucky living a life he loved so many years after first falling in love with the place. Many of Brandon’s friends describe him as fun and caring with “a heart of gold”. His best friend, Jason, recalls the time that Brandon built an igloo in his front yard to hang out in after he came home from the Army. Brandon dragged extension cords through the living room and out the front door. The cables stretched over 30 feet of snowy lawn to power his PlayStation inside the igloo. "We were just two grown men, sitting in an igloo at midnight, playing video games." It was fun and funny to do, which was often the only reason Brandon needed to do just about anything. His favorite holidays were Christmas and Halloween and he would often design his Halloween costumes so that he could "be a part of the decor" to most effectively jump out and scare Trick-or-Treaters. When they lived together, he and his mom decorated elaborately every year. His mom recalls him spending hours in the freezing cold every year, ensuring each Christmas light was placed perfectly and testing every lawn decoration - including his favorite, an inflatable penguin named “Chilly Willy” - to ensure they were fully operational. While living in Kentucky, Brandon was able to exercise his creativity daily in his position as one of the head cooks at Bradford Square, a skilled nursing facility, in Frankfort. Brandon first fell in love with culinary arts and cooking while enrolled in Pioneer High School’s culinary arts program in Ann Arbor, MI. The residents of Bradford Square were special to him, and talking with them during meals was one of the things that brought him regular joy. Brandon’s creativity and artistic nature extended well beyond the kitchen. He was also a talented artisan. He hand-tooled and dyed leather to design and create beautiful purses, wallets, pouches, growlers, and more. He founded Piper Leather in 2016 after spending several years honing his craft. He was a regular vendor at art fairs and had an established online store. Brandon will be missed by all who love him. His neighbors, coworkers, family members, and friends suffer a significant loss together. Brandon's family is honoring his wishes not to hold a funeral and his cremains will be spread in mountains. His family hopes to plan a memorial BBQ for friends and family in Michigan sometime in 2022. In lieu of flowers, Brandon’s family is requesting that donations be made in his honor to the National Park Foundation at give.nationalparks.org.