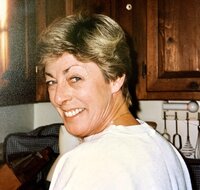 Emogene C. “Genne” Mills died peacefully in the early hours of Sunday, March 27, 2022 at the Frankfort Regional Medical Center. She passed surrounded by the people she loved the most. Born January 22, 1946 in Madison, Indiana, Genne was the only daughter of Garland Lamar and Lilian Katherine Callis of Bedford, Kentucky. She graduated from Trimble County High School in 1963 and earned her BS in Biology from Eastern Kentucky University in 1967. She later completed her master’s degree through the University of Tennessee in 1981. After teaching middle school science for several years, Genne went to work for the Kentucky State Department of Disability Services, where she developed the friendships that would sustain her throughout her life. She eventually retired from a highly-decorated career in state government in 1999. A kind soul and resolute spirit, Genne was the number one cheerleader and support system for her family and friends, and this care for others extended to the smallest among us as well, as she always had a soft spot for her fur babies. Genne was also always ready for an adventure, whether cruising the Alaska coastline or touring the heights of the Berchtesgaden. Genne is survived by her loving spouse Sheila, her two devoted daughters Michelle (Kevin) and Lisa (Jon), and her three grandchildren Sheridan, Katelyn, and Jackson, as well as her large circle of chosen family and friends. Visitation for family and friends will be held at Rogers Funeral Home in Frankfort, KY on Saturday, April 2nd from 1 to 4 pm. Those who wish to pay their respects may choose in lieu of flowers to donate to the Franklin County Humane Society.