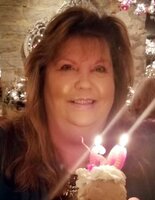 Janet Hill Jewell, 63, passed away on Wednesday, June 1, 2022. Janet was the wife of Tony Jewell and is also survived by two sons, Kyle Jewell (Amanda) and Kurt Jewell; four grandchildren, Levi, Adalyn, Eloise, and Everleigh; a sister, Pat Thomas; and a brother, Tom Hill (Gloria). Janet was born in Frankfort on August 13, 1958 to the late Lewis and Edwina Hill. She attended Good Shepherd Elementary School and graduated from Franklin County High School in 1976, and after receiving a degree from Lexington Community College in 1978, she went on to work as a legal secretary. Janet was a member of Good Shepherd Catholic Church and her greatest love was doting on her family, whether it be cooking for them, buying them gifts, or joining them on vacations. Visitation will be at Rogers Funeral Home from 1:00 to 3:00 pm Sunday. A graveside service will be held in the Sunset Memorial Gardens at 10:00 am Monday. Pallbearers will be Jordan Howard, Greg McCurry, Chris Thomas, Matt Thomas, Alex Hill, Cassie Aldridge, Shelby Aldridge, Erica Wagoner, Jessica Smith, and Valerie Edgeworth. Memorial contributions are suggested to ACCESS Soup Kitchen.