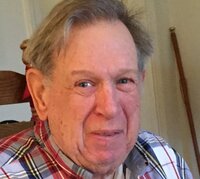 Conrad C. Gutermuth passed away on June 8, 2022 at the age of 80. Conrad was preceded in death by his parents Conrad F. and Louise Gutermuth, and is survived by his sister Lorraine Bennett and his brother-in-law Jimmie. Conrad was the essence of a happy resident of Frankfort. He was born here on February 26, 1942, and lived here all of his life except for a brief stay at Fort Jackson, SC while in the Army Reserves and also while attending Georgetown College and Fugazzi Business College. Conrad was probably the longest continuous member of the Church of the Ascension, where in his youth he served as an acolyte and attended Cathedral Domain for many years. As an adult, he attended church regularly and befriended many Stewart Home residents. Conrad was quite the pianist, and once won first place in a school talent show. He enjoyed the outdoors. As a child he cut grass for neighbors, and his love as an adult was his farm in Bald Knob. The farm created an opportunity for Conrad to meet many people who shared their life knowledge and stories. Most recently, he enjoyed gatherings at West Frankfort McDonald’s and lunches at the Little Market on Bald Knob Road. Conrad was a train enthusiast, particularly for big trains and old trains. He enjoyed reading about trains and spending Sunday afternoons riding the train at the Bluegrass Railway Museum, and often watched the Derby train come through town on its way to Louisville. He also enjoyed learning about local history and lore through reading, and would occasionally attend book signings. He had a knack for easily recalling names, places, and events. Conrad endeavored to live a Christian life. He received the designation of Kentucky Colonel for his service to the disabled community, and until the Covid pandemic halted him, he spent many years visiting with nursing home residents twice a week to play Bingo and brighten their day. Conrad was devoted to his family. He worked side by side with his father at Frankfort Womwell Company for over 40 years, and when his mother became ill he spent every evening with her for almost eight years. And Conrad was the perfect big brother. Early in life he would pull his sister home when she was too tired to walk after a day of sledding, and as adults he would annually place Derby bets for her. As a friend said, “His mother (and father) raised him right.” A funeral service will be held at the Church of the Ascension at 11:00 am on Wednesday, June 15th , with burial following at 2:00 pm at Cave Hill Cemetery in Louisville. Visitation will be Tuesday, June 14th from 5:00 to 7:00 pm at Rogers Funeral Home. While flowers are welcomed, contributions in Conrad’s memory may be made to Church of the Ascension, 311 Washington Street, or to the Salvation Army, 517 Greenup Avenue.