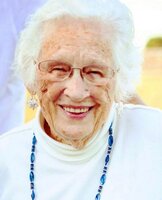 Margaret Taylor Hensley was born in Beaver Dam, Kentucky, on June 8, 1923, to Mary Main and William Edward Taylor. Along with her parents, she was also preceded in death by her husband, Moxie Templeton Hensley; son Samuel Lee Hensley; daughter Billie Jean Roberts; five brothers, John C. Taylor, Walter S. Taylor, W.E. "Buddy" Taylor, Jr., Chester Thomson Taylor, and David Main Taylor; and sister, Mary Agnes Williams. She is survived by her sister Ruth Anne Emerine (Keith) of Vine Grove; daughters Mary Greenwell (James Johnson) of Frankfort, Peggy Hensley of Frankfort, Faye Walker, and Jo Frost (James); and son James Moxie Hensley (Effie) of London. Her grandchildren include Christina Buckner (Chad) of Franklin, TN, Moxie Greenwell (Emily) of Frankfort, Abigail and Sarah Shull of Santa Clara, CA, Samantha Hensley of Frankfort, Jonathan Hensley (Beth) of Versailles, and Carletta Watkins (Tim) of Manchester. Great-grandchildren include Jackson, Taylor and Luis Buckner; Liam, Laurel and Luke Hensley; and Finley and Hensley Greenwell. Margaret lived in Louisville, Kentucky until 1971, when she and Moxie began to travel to each state, as well as Mexico and Canada. They then settled in Citra, Florida, where they lived until Moxie's death in 2001. Margaret returned to live with her daughter Mary in Frankfort in 2004, where she resided until her passing the evening of July 9, 2022. Margaret was an active member of the First United Methodist Church in Frankfort. She enjoyed quilting, crocheting, baking and traveling. To scores of friends throughout the years and spanning the United States and Canada, she was known for keeping in touch and remembering birthdays and special occasions. Margaret, affectionately known by many as "Momma," had an intelligent wit, an endearing personality and a smile to light up any day. She was kind, unassuming and gracious to everyone. She will be sorely missed and is dearly loved. Visitation will be at Rogers Funeral Home in Frankfort on Friday, July 15th from 4:00 to 6:00 pm, with a service following at 6:00 pm. In lieu of flowers, please make a donation in her name to Bluegrass Care Navigators (Hospice).