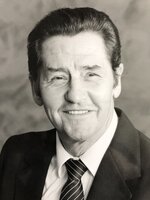 Russell Eugene Siler passed away peacefully at 6:48 am EST July 19th in Midway, Kentucky. He was 92 years old. He was faithful, loyal, hard-working, generous, courageous, and playful. He was the life of any party but when it was time to be serious you wanted him in your corner. He was devoted to his wife Carole. They were high school sweethearts in Kokomo, Indiana and were married 63 years. Thirty-five years of their married life was spent in southern California. They retired back to Indiana in 1994. Carole passed away in 2013. It was only because of Russ’ years-long commitment to physical fitness that he didn't die of a broken heart. In his lifetime he was an electrician, a salesman, an actor, a general contractor, and the director of a YMCA. But most of all he was a husband and father. Russ is survived by his son Steve, his daughter-in-law Meredith, his granddaughter Stephanie (Arturo) Cruz of Nashville, TN, grandson Henry Siler of Davis, CA, and great-grandchildren Cleo Rachel, Noa Isabella, and Arthur Russell Cruz. Steve says, “I wish every child could have the experience of an earthly father like my dad. Anything I have achieved or will ever achieve in this life is because I stand squarely upon his shoulders. He loved horses and he always said he wanted to be able to fly like an eagle. So, I hope there are horses in heaven and that God will let you try out your wings. You earned them dad.” Visitation with the family will be on Saturday, August 20th from 1 pm until 4 pm at Rogers Funeral Home, 507 W 2nd St, Frankfort, KY 40601. Light refreshments will be served. In lieu of flowers the family requests that donations be made to Music for the Soul at P.O. Box 159027, Nashville, TN 37215 or online @ www.musicforthesoul.org/donate