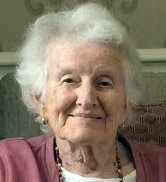 Margaret “Celeste” Curlin Moore, 94, passed away peacefully on July 25, 2022. She was born in Clinton, KY on June 7, 1928 to William P. and Margaret “Maggie” Flatt Curlin. Celeste was preceded in death by her loving husband Benjamin G. Moore, Sr., daughter Margaret Celeste “Lestie” Moore, and her parents. With Celeste’s father working as an engineer building highways and airports, the family moved often. When speaking of her childhood, she talked about attending 14 schools in 12 years. She said that whatever town they lived in she would seek out the library, which served as the beginning of her lifelong love of reading. At the University of Kentucky, Celeste met Ben Moore. She described him as “unlike any other boy I’d met” and they married in 1950 in Lexington, VA. One of the first places they lived was in the historic Miller-Claytor house, known as the Tomato House in Lynchburg, VA, where legend has it that Thomas Jefferson once ate a tomato from the garden to prove to the owner’s child that the “love apple” wasn’t poisonous. The couple eventually moved to Louisville, KY and raised their five children in St. Matthews. Celeste showed amazing perseverance during this time by returning to graduate school to earn her Masters in Library Science from Spalding College. She then worked as a librarian at Jeffersontown High School. In 1974, the family moved to Frankfort and Celeste obtained a position at the Kentucky Department for Libraries and Archives where her job included helping elementary school libraries across the state with book selections. Celeste enjoyed working in the community, joining the Women’s Club of Frankfort, the Garden Club of Frankfort, Silent Workers’ Circle, and serving on the Paul Sawyier Public Library Board of Trustees for 24 years. She was very proud that she was on the library board “that brought such a wonderful new library to Frankfort”. As an adult, Celeste was an active member of Harvey Browne Presbyterian Church in Louisville and then South Frankfort Presbyterian Church, teaching Sunday school to youth for many years. She enjoyed singing in the church choir for most of her life and could be heard practicing her soprano part while preparing many a family meal. While Celeste loved a good book, she also enjoyed playing tennis, walking, gardening, knitting and traveling. After she retired, Celeste took up painting, following in her mother’s footsteps. Every week for many years, she and her friend, Woo, traveled to a Lexington art studio where they created many wonderful paintings. Celeste is survived by her brother William P. Curlin, Jr. (Elizabeth); children Victoria Moore (Charles Horne), Benjamin Moore, Jr. (Linda), Robert Moore (Susan), and William Moore (Sarah); seven grandchildren, Melanie Moore, George Pigman, Margaret Pigman, Brian Moore (Caleigh), Katherine Donnelly (Truitt), Madeline Dills (Jonathan), and Caroline Moore; and one great-grandchild, Thomas Jackman Donnelly. A graveside service will be held in the Frankfort Cemetery at 2:00 pm on Saturday, August 6th.  Donations may be made to South Frankfort Presbyterian Church Remembrance Trust Fund, 224 Steele St., Frankfort, KY 40601 or to Paul Sawyier Public Library, 319 Wapping St., Frankfort, KY 40601.