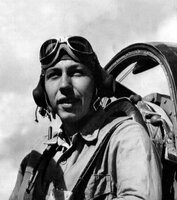 Colonel Roy Church Gray, Jr. USMC, passed away on Thursday, September 8, 2022, at the age of 99.  Born on his family’s farm on Steadmantown Lane in Franklin County to Roy Church Gray, Sr. and Margaret Shaw Gray on July 6, 1923, he attended Murray Street School and Second Street School before graduating from Frankfort High School. As a youth, he competed in many model airplane competitions. This fascination with flying was the foundation of what would eventually become a long and illustrious career. In 1941, Col. Gray won the National Model Airplane Competition in the rubber propeller division. His model airplane climbed approximately 200 feet before catching a thermal and continued to rise until it was out of sight. That same year, following two years at the University of Kentucky, Col. Gray enlisted in the U.S. Navy and later earned a Bachelor of Science degree in aeronautical engineering from Oklahoma State University. After attending flight school, Col. Gray was commissioned as a Marine pilot in 1942.   He retired from active duty in 1973 after serving as Commanding Officer for the Marine Aviation Detachment at the Naval Air Test Center in Patuxent River, MD. During his service, he was awarded multiple medals of honor, including the Legion of Merit with Combat V, Distinguished Flying Cross with three Gold Stars, Air Medal with Gold Stars in lieu of 2nd through 14th awards, Joint Service Medal, Purple Heart with one Gold Star, American Campaign Medal, Asiatic Pacific Campaign Medal, World War II Victory Medal, China Service Medal, National Defense Service Medal with one Bronze Star, Korean Service Medal, Philippine Ribbon, Presidential Unit Citation, Korean Presidential Unit Citation, and Vietnam Service Medal. In 1950, a cockpit fire erupted during a routine flight. Flying over a highly populated city, he remained in the aircraft and navigated his plane to a remote area before parachuting to safety. Although badly burned, his only concern was to make sure that he had missed the town. He received the Navy and Marine Corps Medal for his heroic conduct.  During his military service, he piloted various aircraft, including the SNJ and N3N trainer planes, F4S and F4U fighter planes during World War II, the FJ fighter during the Korean Conflict, the F4D and A4D fighter and attack planes during the Vietnam War, and the AV8, F8, and F3H planes as a test pilot. While on a bombing mission during the Korean Conflict, Col. Gray's aircraft was forced to crash land after being hit by hostile fire.  He was taken prisoner by North Korean soldiers and remained a prisoner of war for 18 months before his release.    Following his retirement from service, Col. Gray remained at the Naval Air Test Station for almost 20 years serving as a civilian engineering contractor and was involved in the development of the F-14 and F/A 18 Naval aircraft. He remained active in the aviation community, retaining his pilot's license until he was in his 80s and owning a Cherokee Piper that he often used to fly home to Kentucky. In 2015 he was inducted into the Frankfort Independent Schools Hall of Fame, and in 2017 was inducted into the Kentucky Aviation Hall of Fame.  Col. Gray was preceded in death by his wife, Natalie Wheeler Gray. He is survived by two daughters, Margorie Gray Holden (Robert) and Caroline Gray; three sons, John Gray (Martha), Roy Gray (Suzanne), and Charles Gray (Karen); 16 grandchildren; and 16 great-grandchildren. A graveside service will be held in the Frankfort Cemetery at 1:00 pm on Saturday, September 17, 2022. In lieu of flowers, the family suggests that donations in Col. Gray's honor be made to the Patuxent River Naval Air Museum, 22156 Three Notch Road, Lexington Park, MD 20653-2008 or online at paxmuseum.com/donate.