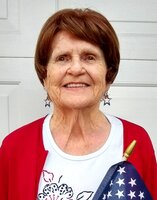 Joy Stevens, 88, passed away peacefully in her sleep on the morning of Sunday, September 18, 2022. Joy was born to Mabel Meyne Pohl and Walter Pohl on April 3, 1934. A native of Wellsville, NY, she was a 1952 graduate of Wellsville Senior High School and received her R.N. degree from Upsala College, then went on to further study at Claramass Hospital. She worked for several years as a registered nurse at the V.A. Hospital in Buffalo, New York. Joy married Richard Stevens in 1957, and they moved to Detroit, MI. They later lived in Lexington, KY, and Erlanger, KY before settling in Frankfort in 1982. She was a long-time member and Past President of the V.F.W. Post #4075 Ladies Auxiliary and a member of First Presbyterian Church, She was an avid UK fan and also enjoyed playing Bingo and spending time with her five grandsons. Joy is survived by two daughters, Shelley King (Tom) and Tracy Milton (Dennis); a son, Craig Stevens (Jama); and five grandchildren, Justin King (Hollie), Andrew King, Chris Milton, Jeremy Milton (Anna), and Nathan Milton. She was preceded in death by her husband Richard and her two sisters, Marlene Rose and Sharon Lentz. A memorial service will be held at Rogers Funeral Home at 11:00 am Thursday, September 22nd with Rev. J. T. Silence officiating. Visitation will precede the service at 10:00 am. Interment will follow in the Frankfort Cemetery. In lieu of flowers, memorial contributions are suggested to the American Red Cross - Franklin County Chapter.