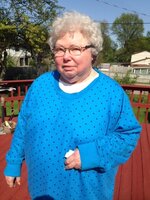 Alice Ann Pennington was born on December 29, 1941 to Charles and Lorena Pennington and grew up in Frankfort, Ky. She started taking piano lessons in the second grade, and by the time she graduated from Frankfort High School in 1960, she was a fantastic piano player. She attended Centre College for two years, and then received a full academic scholarship from the University of Louisville where she finished out her Bachelor of Science degree in Biology with a minor in Chemistry. Alice then took a position with Phillip Morris doing research on the adverse effects of tobacco, and later earned a certification in Hematology. Alice always wanted to live in Florida, so she moved to Miami to work in the Key Biscayne Hospital. While there, she bought a sailboat and became a great sailor and sailed the Caribbean sea, and also became a licensed scuba diver. She eventually bought a house in Key Largo where she could live out her aspirations. Alice later decided to work for the University Of Florida's Shands Hospital in Gainesville, and bought a small horse ranch and two show horses in a small town nearby. Her horse Wild Card won many ribbons in various fairs and horse shows, including the Florida State Fair. Alice truly lived a fascinating life, and passed away on October 7, 2022. Alice is survived by her brother Timothy Pennington and sister-in-law Ingeborg Pennington, niece Mary Alice Claussen (Brian), and nephews Nikolai Pennington and Chuck Pennington (Patty). In addition to her parents, she was also preceded in death by her brother Chick Pennington and his wife Patsy Pennington. A graveside service will be held on Friday, October 28th at 2:30 pm in the Frankfort Cemetery, followed by a reception at the home of Nikolai Pennington. In lieu of flowers, memorial contributions are requested to South Frankfort Presbyterian Church, Benevolence Trust Fund, 224 Steele Street, Frankfort, KY 40601.