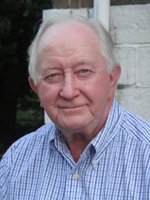 John Raymond Luttrell, 86, of Frankfort, KY, passed away peacefully at his home on June 24, 2020 from brain and lung cancer. A private graveside service will be held at The Antioch Church Cemetery with his nephew, Pastor Dan Luttrell, officiating. Arrangements are by Rogers Funeral Home, Frankfort. A Celebration of Life will be announced at a later date. Johnny was born in Franklin County to Raymond Luttrell and Mabel Skiles Luttrell on January 31, 1934. He was a 1954 graduate of Bald Knob High School where he was a member of the “Fabulous Five” basketball team. He was a lifelong fan of the Kentucky Wildcats. There he also met his high school sweetheart, local author, Wanda Joy Moore Luttrell. They were married on June 20, 1954, and celebrated their 66th wedding anniversary this year. Johnny was a loving and well-loved husband, father, grandfather, uncle, cousin, and friend. People knew him as a gentle man who was hardworking, genial, loyal, and deeply devoted to his family, friends, church, and his Savior, Jesus Christ. He was a member of The Antioch Church for 70 years where he served as a deacon and then an elder. He was a member of the Bluegrass, Rolling Fork, Loveland, and Honeybee Beagle Clubs, and an avid participant in the American Kennel Club field trials across Kentucky, Ohio, Tennessee, Georgia, and Michigan, finishing more than a dozen field champions. He was also a member of the Masonic Lodge #4 in Frankfort. He was employed by the Kentucky Department of Transportation for 36 years and after his retirement in 1995, he worked for Kentucky Logo Company for two years. He also farmed and worked as a mechanic in his home in the Bald Knob community in Franklin County. In addition to his wife, he is survived by one sister, Pamela Jill Greenwell, one son, John Bradley Luttrell, four daughters, Leah Luttrell, Dr. Rebecca Briley, Cara Jimenez (Damian), Jennifer Luttrell, four grandchildren, Dami (Estefania), Ana, Lidia, and David Jimenez, and three great grandchildren, Lincoln Peters, Lucia and Leo Jimenez. He was preceded in death by his parents, his brother, former Frankfort City Commissioner, Buddy Luttrell, and his sister, Maugarite Scott Green. Pallbearers will be Ance Hatfield, Andy Koontz, Brad Luttrell, Brent Roberts, Damian Jimenez, Danny Hulker, Russell Romine, Sr., and Wayne Moore. In lieu of flowers, contributions may be made to The Antioch Church, Bluegrass Care Navigators (Hospice), or Jerusalem Prayer Team Holocaust Survivors.