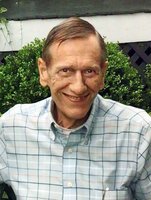 William C. Eddins, 78, passed away on Sunday, December 20, 2020. He is survived by his wife, Lucy Jo Terry Eddins; two daughters, Cindy Lou Cook and Karen Lee Averill (Tracy); a son, Terry Lynn Eddins; a brother, Dr. Tom Clay Eddins; three grandchildren, Collin Averill and Kenny and Kendra Bentley; and five great-grandchildren. He was preceded in death by a son, Ronald James Eddins. Born in Frankfort on May 15, 1942, Bill was the son of the late William Clay Eddins and Elizabeth Metz Eddins. A graduate of Frankfort High School and Eastern Kentucky University, he was an Army veteran achieving the rank of First Lieutenant, and was retired from work as the Commissioner for the Environmental Protection Cabinet of Kentucky State Government. Bill was a long-time member of Bridgeport Christian Church and in his free time enjoyed playing golf, woodworking, playing bridge, traveling, and singing. Services will be held at Rogers Funeral home at 10:00 a.m. Wednesday followed by burial in the Frankfort Cemetery. Visitation will be at the funeral home from 5:00 to 7:00 p.m. Tuesday. Contributions in Bill's memory are suggested to Bridgeport Christian Church or to the veterans charity of your choice.