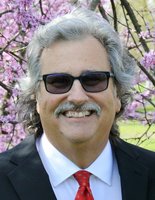 Daniel Joseph "Danny" Ahler, 67, husband of Amy West Ahler, passed away on Sunday, January 24, 2021. Danny was a lifelong Frankfort resident, born to his parents Harold Ahler and Lucy Ferrante Ahler on April 21, 1953. He graduated from Good Shepherd School and Franklin County High School, and went on to receive a bachelor's degree from the University of Kentucky. He retired from work with the Commonwealth of Kentucky as an IT Technician. Music was a part of Danny's life from a young age, and he would often be found drumming with his band Beyond Apple or the praise band at Capital City Christian Church. Woodworking was a hobby that he loved, and he always enjoyed spending time with his family. Along with his wife Amy, Danny is also survived by two sisters, Mary K. Aarsvold and Carolyn Gaines; a sister-in-law, Robyn O'Daniel; a brother-in-law, Eric West (Cindy); a daughter by marriage, Adrianne Duncan (Lance) and her children Kenendy and Cole; and a special daughter-in-law, Amy Wilson and her daughter Jolie. A service in celebration of Danny's life will be held at Capital City Christian Church at 12:00 pm on Saturday, January 30th followed by interment in the Frankfort Cemetery. Visitation will begin at 10:00 am. Vern Huber and Jon Sutphin will officiate the services. Honorary pallbearers will be John Perkins, Grant Sudduth, and Bobby Redding. Flowers are welcome, and Danny would have appreciated that any contributions in his memory be made to the Generous Bucket at Capital City Christian Church to assist those in need in our community. (CCCC Generous Bucket, 15 Locust Drive, Frankfort, KY 40601)