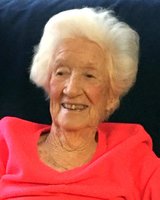 Mary Charlton Hulette passed away on February 19, 2021 at the age of 102. Born in Frankfort on April 11, 1918 to Charlton Clay Hundley and Mary Mason Marshall Hundley, she was the widow of Albert Hulette. Mary Charlton was a lifelong resident of Frankfort and a longtime employee of Farmers Bank, an active member of First Church of Christ Scientist, and a member of the DAR. She loved to read,  was an avid traveller throughout the United States and Europe, and was an avid bridge player who continued playing late into her life. She was also a wonderful hostess, always preparing delicious meals for family and friends and entertaining with generous love and friendship. She delighted in being with family, especially her grandchildren of whom she took such loving care, and her great-granddaughters. Mary Charlton is survived by a daughter-in-law, Barbara Pickett Hulette; a half-brother, Charlton Clay Hundley; a granddaughter, Elizabeth Shaw Hulette; a grandson, Ben Charlton Hulette; and two great-granddaughters, Lauren Lee Hulette and Carlie Ann Hulette. She was preceded in death by her son Richard A. Hulette. The family would like to express their sincere gratitude to Nikki Leathers and Christin Stephens for their devoted and loving care. A graveside service will be held at the Frankfort Cemetery at 11:00 a.m. on Saturday, July 17th. In lieu of flowers, memorial contributions may be made to the charity of your choice.