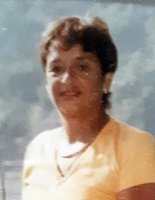 Donna Lou Gross Gershman, 92, passed away on March 7, 2021. The daughter of Ted and Jeanne (Jacobs) Gross, she was born and raised in Cincinnati, Ohio. Donnie graduated from Walnut Hills High School and attended the University of Cincinnati until marrying Irvine Gershman and moving to Frankfort, Ky. Always an athletic and daring woman, in her youth she had an airplane pilot's license, and later in her 40's owned a Harley Davidson sportster. She was very connected to the Frankfort community through leading a girl scout troop, her membership at the Frankfort Country Club, working with the Kentucky Book Fair, and volunteering with the Red Cross where she trained lifeguards and water safety instructors and taught adult swimming. After being hired to run the aquatic program and manage pool maintenance at Kentucky State College, she finished her college degree and received her Masters degree at the University of Kentucky. Donnie was devoted to Kentucky State University, teaching in the health / rec / physical education department and supporting the football program, until retiring after 30 years in May of 1991. Donnie was an avid reader of books and magazines of all kinds, and an enthusiast of football, basketball, tennis, golf, and NASCAR. She was a regular Kentucky river rat, and enjoyed traveling in her RV to various places in the US, including to her oceanside lot at South Padre Island, Texas with the current dear doggo always by her side, starting with Growley, then Willie, Sissy Meigs, Max, Bucky, Rusty, and Teddy, and ending with Rollo (aka dba Roscoe). Donnie leaves behind her three children, Mark Tobias of Portland, Oregon, Elizabeth Ann (Boo) of Slatington, Pa., and Joan Frances (Jody) of Frankfort, Ky., and honorary son Council Rudolph of Tampa, Fla. A memorial service will be held at Rogers Funeral Home at 11:00 a.m. Thursday with visitation preceding at 10:00 am. In lieu of flowers, memorial contributions are suggested to the Franklin County Humane Society.