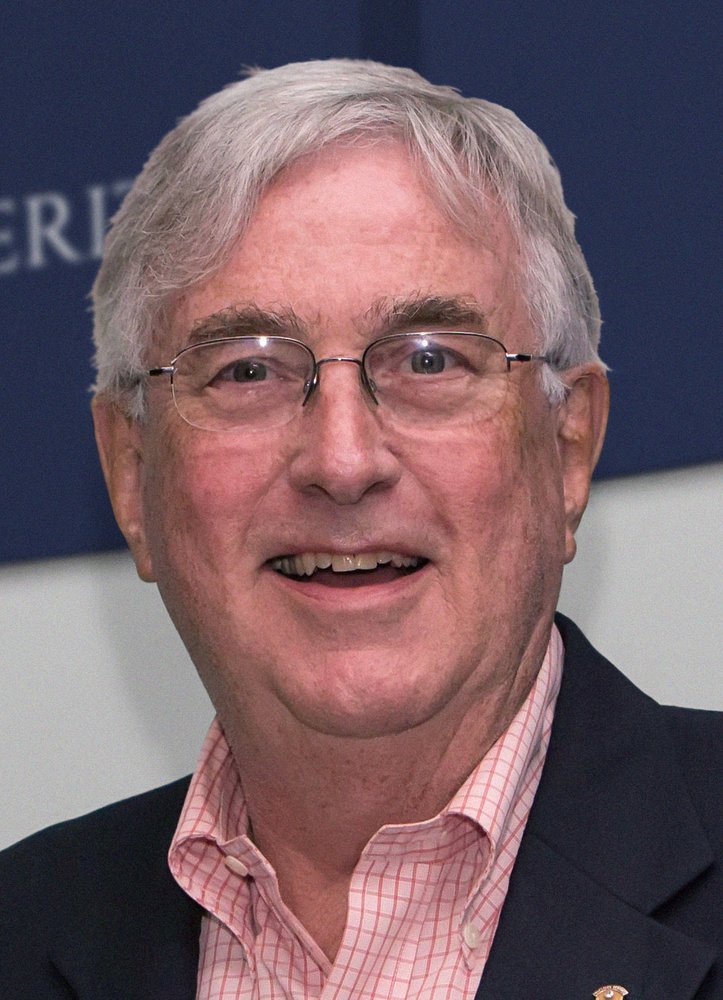 Harry Lee Waterfield II passed away on September 24th after a two-year battle with Parkinson’s. He was known for his love of family, passion for sports (Go Cats!), loyalty and generosity, dedication to Investors Heritage Life Insurance Company, commitment to the city of Frankfort and Commonwealth of Kentucky, and the genuine warmth he felt toward all - friend or stranger. He was also known for his signature dance move (the Gator), colorful word choice (can’t print here), and commitment to working hard and having a good time. Of all the titles he held in his lifetime, “Dad” and “Coach” were among his favorites.

A Kentuckian through and through, Harry Lee grew up in Clinton, Kentucky. Born to Laura (Ferguson) and Harry Lee Waterfield, the former Speaker of the House and Lieutenant Governor of Kentucky, he spent a number of his formative years in Frankfort while his father served as Lt. Governor. After retiring from politics, the senior Harry Lee founded Investors Heritage, a life insurance company which is now one of the largest employers in Frankfort. Harry Lee II held many positions at the office, finally serving as President, CEO and Chairman of the Board of Investors Heritage Life Insurance Company and Investors Heritage Capital Corporation (formerly Kentucky Investors, Inc.). He grew the company and its reach while honoring his father’s legacy, treating employees, agents, and clients like family, keeping his word at every turn, and generously giving back to his community.

Harry Lee was always a man of action, so when his oldest daughter was in an elementary school with no girls’ basketball program, he helped to start one. Arranging practices at any available gym he could wrangle, Harry Lee was a stickler for the importance of perfecting the fundamentals, out-hustling your opponent, and knowing the game. He coached all four of his children and many other young people coming up through the ranks of elementary and middle school at Capital Day School over the years. His players remember him as patient, enthusiastic, and dedicated. And yes, he unabashedly shed some tears when his Capital Day Cavaliers finally beat their cross-town rivals, Good Shepherd School.

When he started welcoming grandchildren into his life, naturally, they called him “Coach” or “Coachie.” As a father, he was religious about making it to his children’s sporting events and when he wasn’t coaching, he cheered (and maybe coached a little from the stands!). As a grandfather, he was courtside or bleacher-bound for as many games as he could manage. Encouraging his children and grandchildren to find their passions and pursue them, he took great joy in the different journeys each chose.

A believer in the power of higher education and a staunch advocate that higher education should be accessible to all who work for it, Harry Lee served on the boards of Kentucky State University, Murray State University, and he served as a member of the board for Lees College Foundation. He also believed in the importance of a solid educational foundation and was a long-standing supporter of Capital Day School, an independent preK-8 school in Frankfort that his four children attended.

Harry Lee also believed in giving back professionally. Well respected and a leader in the life insurance industry nationally, he served five years as an officer and Chairman of the National Association of Life Companies. He received the Association's Poindexter Award in 1990. He was one of three founders of the National Alliance of Life Companies and served as its first president, a position he held for two years. In 1995, he received their first Governor's Award. His efforts were instrumental in preserving a voice for small and mid-sized life and health insurance companies nationwide.

Locally, Harry Lee was committed to serving the business and wider community. He served as a past President of the Frankfort/Franklin County Chamber of Commerce and Big Brothers/Big Sisters of Frankfort and as Vice Chairman of the Frankfort Tourist and Convention Commission. He was also an Advisory Director for Whitaker Bank in Frankfort. His impact reached across the state as he also served as a trustee for the Kentucky State Fair Board and the Kentucky Chamber of Commerce. He is a former member of the Kentucky Air National Guard. In 1975, he was named one of Kentucky’s Five Outstanding Young Men.

Under Harry Lee’s leadership, Investors Heritage closed a merger transaction in early 2018 which will provide for significant growth of the company, additional investment in Frankfort and the Commonwealth, and provide for the creation of up to 75 new jobs. Recently, the S&P ranked Investors Heritage the fastest growing life and annuity company in the country for 2018.

Harry Lee is survived by his wife of 53 years, Nancye Lee (Johnson); his daughters Whitney Waterfield (David Nofsinger) of Louisville, KY, and Ryan Waterfield (Greg Van Der Meulen) of Hailey, ID; his sons Harry Lee Waterfield III (Ashley) of Louisville, KY, and Garth Waterfield (Kaitlin) of Lexington, KY; eight grandchildren: Harper (16) and Willis (13) Nofsinger; Townes (10) and Zula (6) Van Der Meulen; Harry Lee IV (12), Daniel (9), and Isabelle (8) Waterfield; and Kares (2) Waterfield. And in the final weeks, when he heard that Garth and Kaitlin were expecting a second child (his 9th grandchild), he was overjoyed. Harry Lee is also survived by his sisters Rose Gayle Waterfield Hardy and Nancy Waterfield Walton, both of Frankfort, as well as his many nephews and nieces and great-nephews and great-nieces for whom he felt so much love and admiration.

Services will be held in Frankfort, KY. Visitation will be on Wednesday, October 2nd at Rogers Funeral Home from 3-7 p.m. The funeral service will be held at First Presbyterian Church on Thursday, October 3rd at 11:00 a.m. followed by a reception at the Frankfort Country Club at 12:30 p.m. The family will hold a private burial after the service and then join friends at Frankfort Country Club. In lieu of flowers, donations may be made to Capital Day School.

To send flowers to the family or plant a tree in memory of Harry Lee Waterfield II, please visit Tribute Store
Wednesday
2
October

Share Your Memory of
Harry Lee
Upload Your Memory View All Memories
Be the first to upload a memory!
Share A Memory
Send Flowers
Plant a Tree