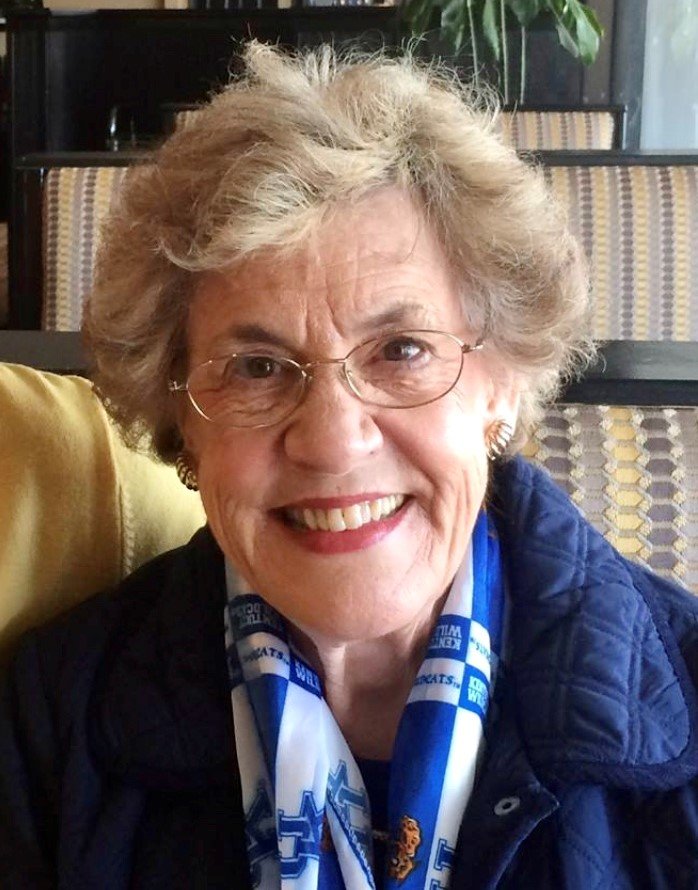 Please share a memory of Margo to include in a keepsake book for family and friends.
View Tribute Book

Margo Jolly Cotton, 80, passed into eternal life on October 14, 2019, at her home in Frankfort, Kentucky, after an eight-year battle with breast cancer.  She was born on March 10, 1939, in Cincinnati, Ohio, the only child of William Chester “Check” Jolly and Kathryn Smith Jolly Williams. Shortly thereafter, Margo and her family moved to Panama while her father served as a Lieutenant in the United States Navy.  Later, in 1945, the family moved to Frankfort, where Margo grew up, attending Murray Street, Second Street, and Frankfort High Schools. She graduated from Frankfort High School in 1957 and attended Mary Baldwin College and the University of Kentucky. While at UK, she pledged the Chi Omega Sorority, but left the university to marry her childhood sweetheart, Chuck Cotton, on December 26, 1959. Since Chuck was a graduate of VMI and active in the United States Army, they moved to Fort Campbell, where both Anne and Allen were born. As Chuck transitioned from stateside military service to NATO, the growing family moved to Fontainebleau, France, from 1962-1965. While there, the Cottons added another son and daughter to their family—Will and Martha. Called home, in 1965, by the death of Chuck’s father, Al Cotton, the family returned to Frankfort and made their home there. It was in Frankfort that they completed their family of eight by adding two more sons — Sheldon and Russell. They shared a life of fifty-six years together until God called Margo’s beloved Chuck home on February 16, 2016.

Margo spent most of her life raising and nurturing her six children. Then, when the children were a little older, from 1980 until 2,000,she and her close friends, Skipper Fossett and Randi Meyer, directed The Frankfort Junior Cotillion, an organization that taught middle school youths not only dance protocol but also social etiquette. In addition to this endeavor, Margo also worked full-time at A Touch of Grace, assisting her community with her talent for home décor and home staging. She was also skilled in flower arrangement and Christmas and holiday event planning. As time passed and Margo retired from Cotillion and A Touch of Grace, she used her hospitality and design skills to coordinate weddings at Good Shepherd Catholic Church. Then, after her husband’s retirement, she and Chuck traveled abroad, attended many VMI reunions, and spent much time at the family’s Hilton Head condominium. In 2011, Margo began a second battle with breast cancer, yet continued to care lovingly and diligently for Chuck as he had been diagnosed with Parkinson’s Disease.

Margo’s strong faith in Christ is embodied in her life-verse, Philippians 4:13: “I can do all things through Him who strengthens me.” The source of Margo’s strength was Christ Himself. She trusted in His power to enable her to do God’s will, regardless of her circumstances. Margo’s legacy of faith not only impacted her children and grandchildren but also a multitude of friends and acquaintances who all benefitted from her diligent and intentional commitment to Christ, whether through acts of service, gifts, or prayer. This spiritual tenacity is Margo’s gift to all who knew her—she was a faithful servant of the Lord.

The family will receive friends at Rogers Funeral Home, 507 West 2nd Street, Frankfort, KY, from 5:00-7:00 p.m. on Friday, October 18, 2019. To celebrate Margo’s life, a Catholic Mass will be held on Saturday, October 19, at 2:00 p.m. at the Good Shepherd Catholic Church, 70 Shepherd Way, in Frankfort, Kentucky. Interment will follow at 4:00 at the Frankfort Cemetery. Those who wish to remember Margo in a special way may make gifts in her memory to the Saint Vincent De Paul Society at the Good Shepherd Catholic Church, 70 Shepherd Way, Frankfort, KY 40601-7565;  or at the soup kitchen in Frankfort that Chuck started, Access Men’s Soup Kitchen, also known as Coalition of Christian Men, 311 West Second Street, Frankfort, Kentucky 40601.

The family would like to thank Tomi Barrett for her faithful and excellent commitment to both Chuck and Margo in their healthcare needs for the past six years.

To send flowers to the family or plant a tree in memory of Margo Cotton, please visit Tribute Store
Friday
18
October

Share Your Memory of
Margo
Upload Your Memory View All Memories
Be the first to upload a memory!
Share A Memory
Send Flowers
Plant a Tree