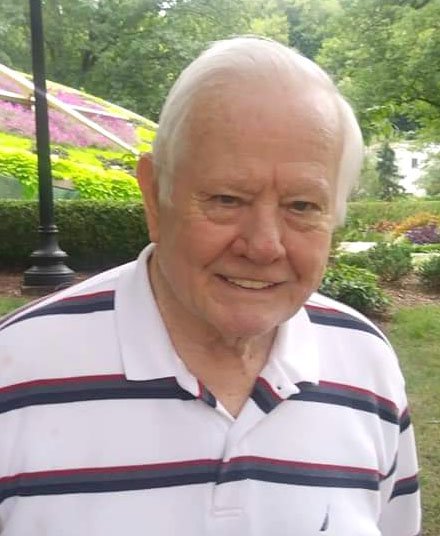 Please share a memory of James to include in a keepsake book for family and friends.
View Tribute Book

Born in Martin, Kentucky on September 4, 1935, Jim was the son of the late Bascom and Mary Nettie Williams Conley. He received his B.S. in Education / Industrial Arts from from Eastern Kentucky University where he was a four-year letterman in football, and went on to obtain two post-graduate degrees in Education Administration from Morehead State University.

Upon graduating from Morehead, Jim worked as an industrial arts teacher at Raceland High School and eventually became Principal there. He then spent 32 years as a K-12 textbook sales representative for Xerox and Macmillan/McGraw-Hill.

Jim coached football at Raceland from 1961-1965, and was once named Northeastern Ky. Conference Football Coach of the Year. In 2015 he was inducted into the Raceland Football League Hall of Fame. He was also a member of the EKU Worn Cleat Club.

Along with his wife Sandy, Jim is also survived by a daughter, Kimberlee Conley Perry (Ray); a son, James Kipton Conley (Kay); and two grandchildren, Clayton Conley Perry and Taylor Daniel Powell. The family would like to send a special thanks to his loving caregivers, Charles Mitchell, Kelly Agee, Aundrea Owens, Margaret Katherine Redden, and Tee Blythe.

A memorial service will be held at Rogers Funeral Home on Monday, October 28, 2019, at 6:00 p.m. with visitation preceding at 4:00 p.m. In lieu of flowers, the family requests contributions in Jim's memory be made to the Alzheimer's Association or St. Jude Children's Research Hospital.

To send flowers to the family or plant a tree in memory of James Conley, please visit Tribute Store
Monday
28
October

Share Your Memory of
James
Upload Your Memory View All Memories
Be the first to upload a memory!
Share A Memory
Send Flowers
Plant a Tree