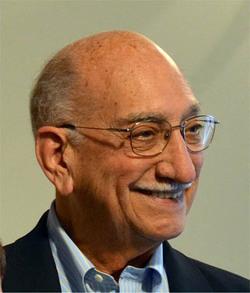 Please share a memory of Calixto to include in a keepsake book for family and friends.
View Tribute Book
Dr. Calixto Carlos Hernandez, 84, died at his home in Frankfort on July 13, 2013. Dr. Hernandez is survived by his wife, the former Jacqueline Adams; two children, Elena Hernandez Page (Greg Page) and Carlos Hernandez (Vicki); and four beloved grandchildren, Gabriel and Jacqueline Page, and Nathaniel and Emily Hernandez. Born in Havana, Cuba, Dr. Hernandez received his M.D. at the University of Havana Medical School in 1956. He was slated to be the head of all health resources under the new republic in Cuba when he realized what this new republic actually encompassed. Dr. Hernandez narrowly escaped to the United States. He interned at Sts. Mary and Elizabeth Hospital, Louisville, KY. from 1957-1958 and then did a General Surgery Residency at St Anthony Hospital in Louisville, KY. He was licensed in Kentucky to practice medicine in 1960. Dr. Hernandez also received a Masters in Public Health from the University of California, Berkley, and received Management Training at the American Management Association, New York, NY. He became a citizen of his new country in 1964. Dr. Hernandez served his country well. Early in his career, he was Director of Hardin County Public Health Department in Elizabethtown, KY, and was responsible for the total programming in areas of communicable diseases and immunizations, just to name a few. After moving to Frankfort and joining the KY Department for Health Services, Dr. Hernandez was Director of the Division for Preventive Services, Deputy Commissioner for Medical Programs, Acting Director of the Office of Local Health, Director of the Division of Epidemiology, and served on the Rural Kentucky Medical Scholarship Board and the Kentucky Board of Medical Licensure. He was appointed Commissioner of the Kentucky Department for Health Services by then Gov. Martha Layne Collins, and served in that position from 1984 to 1992. As Commissioner, Dr. Hernandez was responsible for the total management of the official health agency in the Commonwealth and all the local health departments. He instituted many programs benefitting the residents of Kentucky, including mammograms for women of Eastern KY not covered by any other healthcare. Dr. Hernandez was a member of the Field Faculty and an Assistant Clinical Professor in the Department of Community Medicine at the University of Kentucky College of Medicine, and Assistant Clinical Professor of Family Practice and Community Health at the University Louisville School of Medicine. Never wanting to retire, he was until his death a Medical Consultant to the Social Security Disability Program. A tireless advocate for many causes, Dr. Hernandez was affiliated with the American Diabetes Assn., American Cancer Society, Franklin Co. Medical Society, KY Medical Association, and the National Association of Disability Examiners. Visitation will be held at Rogers Funeral Home from 3:30 to 5:30 pm on Tuesday with a memorial service following at 5:30 pm. Donations may be made to the Hospice of the Bluegrass, American Diabetes Assn., or the St. Vincent DePaul Society.
To send flowers to the family or plant a tree in memory of Calixto Hernandez, please visit Tribute Store
Tuesday
16
July

Share Your Memory of
Calixto
Upload Your Memory View All Memories
Be the first to upload a memory!
Share A Memory
Send Flowers
Plant a Tree